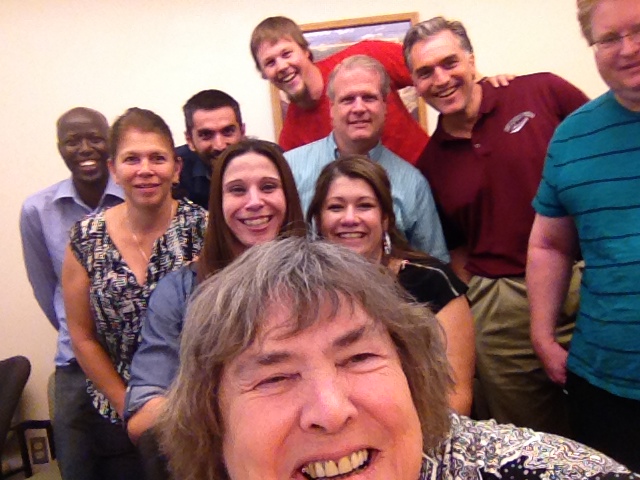 I grew up to be a professor of learning design and technology. This is a selfie of some of my graduate students in my class and myself.

I was aware of technology very early when before the age of 6 I spent time with my dad putting together a TV from a kit in the basement of a small house in Lansdowne, Pennysylvania. I would hand him ancient vacuum tubes to plug in. We had the first television in the neighborhood, a small round window in a boring-looking box that had programs only a few hours of the day.

Later, living in San Diego, California my dad came home with a wrist band on his wrist. He had what he told me was the duplicate of the early computer disc.  He told me that soon we would have much smaller radios and other devices , which would be much faster. Without thinking about it I was living Norman’s Law where technology got smaller and the operations became twice as fast.

My dad, a professor of physics at the University of Pennsylvania, loved electronic tools even in their earliest iterations. He had an OSBORNE computer that was maybe luggable and he eventually gave it to me.. I used it to write on, using commands to make bold letters and simple punctuation. It was what was called a carrying computer and I wrote my dissertation on that old thing.

The Power of the Electronic Pen

Work as a Professor Researcher